Richard Lange’s stories have appeared in The Sun, The Iowa Review, and Best American Mystery Stories, and as part of the Atlantic Monthly’s Fiction for Kindle series. "Apocrypha" was awarded the 2015 Short Story Dagger by 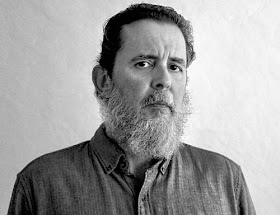 Great Britain's Crime Writers' Association. He is the author of the collections Dead Boys and Sweet Nothing and the novels This Wicked World, Angel Baby, which won the Hammett Prize from the International Association of Crime Writers, The Smack and the newly released Rovers. He received the Rosenthal Family Foundation Award from the American Academy of Arts and Letters and was a 2009 Guggenheim Fellow.

My Q&A with Lange:

A title should intrigue potential readers but not confuse them. I usually end up pulling a word or phrase from the book, something evocative but also mysterious, so that when the reader stumbles upon it in the text, there’s a bit of an “Aha” moment.

In the case of Rovers, the working title was The Little Red God, which came from a poem written by a Montana convict in the 1950s. Rovers tells the story of Jesse and his mentally-challenged brother, Edgar. The brothers are rovers, vampire-like beings who must drink human blood to survive. Jesse turned Edgar into a rover in order to watch over him in the wake of their mother’s death.

Edgar believes his craving for blood is caused by an actual creature living inside him, a creature he referred to in the first draft as the Little Red God. I changed this to “the little devil” in the second draft, which didn’t feel like a great title possibility, so I ended up going with Rovers. It’s a good word, painting a picture in your mind, and its meaning in the book is explained in the first chapter. There’s already so much going on in the story, I decided to keep the title simple and fairly direct.

I generally make the names pretty generic in my books. I like to keep readers moving along without them pausing to chuckle at my cleverness. This is a good rule of thumb for every element of a book. Naming the characters in Rovers, though, required a little more thought than usual, as some of them were born in the 17th, 18th, and 19th centuries, in France, Spain, and even Africa. I looked up names from these eras and regions, sometimes consulting lists of authors, scientists, politicians, and other prominent people and recombining first and last names to make my own. I still kept them simple, but also historically accurate, thus Claudine Dejardin, Diego Mateo Casal, and Amadu Beaumont.

Fourteen-year-old me would be less surprised by Rovers than 40-year-old me. The elevator pitch for the book is “Of Mice and Men with vampires.” I was a big horror/sci fi fan as a teen, and some of my earliest fictional output was in these genres, so that kid wouldn’t be shocked at all that a hundred years later I’d write a vampire novel.

Forty-year-old me, though, whose literary tastes and models ran more to William Faulkner, Ray Carver, and Elmore Leonard than Stephen King; who, in fact, had not read or written horror or science fiction since discovering Kerouac and Hemingway at age sixteen, would certainly be thinking “What the hell?” Of course, he couldn’t have known how restless he’d be as a writer once he had a few books under his belt, how unwilling to be pigeonholed, and how eager to explore new avenues as an artist. Forty-year-old me thought he had everything figured out, but he was wrong.

They’re equally as hard but present different challenges. With beginnings, I’m trying to grab readers and drag them into the book, intrigue or excite them. With endings, the goal is to encapsulate the experience of the entire book in a few paragraphs and make it resonate as something larger than just the plot wrapping up, something philosophical or thematic. I probably work more on endings, tweaking them. Those last paragraphs are going to be what readers take away from the book. They’re going to loom large in their memories, so they better be good. In the case of Rovers, the last paragraphs mirror the first. It’d be a major spoiler to discuss this any further, so I won’t. I will say that I hadn’t planned the book this way – I don’t plan ahead much when writing – but when it happened, I knew it was great.

You can’t write well-rounded, realistic characters without putting something of yourself into them. It’s like dreaming. When you dream of your brother or your wife or an old friend, it’s not actually that person 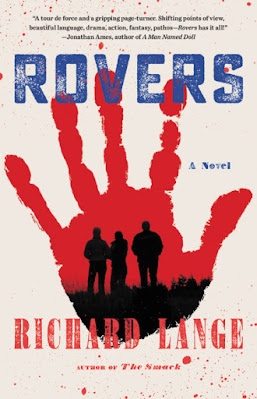 in the dream, it’s your construction of that person. Everyone in your dreams is created and voiced by you, is you. Similarly, all the characters in Rovers think the thoughts I’ve given them and speak the lines I’ve written for them, and therefore can’t help but have aspects of me if I’m doing the hard work of writing truthfully.

A conscious non-literary influence for Rovers were the ’70s-era drive-in tragedies that captivated me as a kid (the novel is set in 1976), films like Aloha Bobby and Rose, Billy Jack, Macon County Line, Buster and Billie, Rafferty and the Gold Dust Twins, etc., etc. These films had a scuzzy romanticism and an anti-establishment attitude that set them apart from more mainstream fare and were as heartfelt as they were lurid, a range I was going for in Rovers. I didn’t set out to write a horror novel, I set out to put Dusty and Sweets McGee on the page, and I hope I succeeded in capturing some of the same shambling magic that it and other films of its ilk have.

The Page 69 Test: This Wicked World.