Andrea Wang is the award-winning author of the picture books The Nian Monster (Asian/Pacific American Award for Literature Honor), Magic Ramen (Freeman Book Award Honor), and Watercress. The Many Meanings of Meilan is her debut middle-grade novel. The first character in Wang’s Chinese name is an 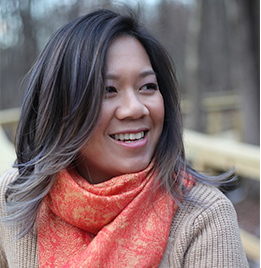 archaic one that means fragrant, but her parents’ friends all thought it was the character for jade, which sounds exactly the same. That sparked her lifelong interest in names and identity. She’d much rather be a rock than smelly. Wang likes to write about family, food, and culture. She spent her childhood in Ohio and Boston and now lives in Colorado with her family.

My agent actually came up with the title The Many Meanings of Meilan. I originally called my book The Orchid Variations, but that doesn't do nearly as much work as a title since it assumes that readers know that the second syllable of Meilan's name, "lan," means "orchid" in Mandarin. The current title does a much better job -- right away you know that Meilan is Chinese American and that the story is about the different ways she sees and defines herself by her name.

Meilan's name is the crux of the book. When the principal of her new school renames her to "Melanie" because it "sounds more American," she begins to question who she really is. Her parents also start calling her by a new nickname, "Lan," which further confuses her. When she discovers that there are multiple Chinese characters with different meanings that are all pronounced "Lan," her sense of self begins to fracture. She decides to adopt three of these homophones -- the words for "basket," "mist," and "blue," as the meanings 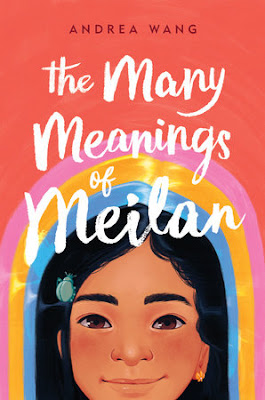 for who she is in different situations, and behaves accordingly. It's not until her grandfather tells her the origin of her name that she learns to embrace her whole self.

My teenage self would be surprised and mortified by The Many Meanings of Meilan. I was a very shy and reserved teen who would never have considered writing a book that is so deeply personal and reflects so many of my own struggles with identity, family dynamics, microaggressions, and racism.

I never know the right place to begin a story until I've written the ending. I always knew that the book would be about Meilan's code-switching and end with her uniting the different versions of herself, but it took a while (and my wonderful editor's help) to figure out what she was like before and how she got to the point where she felt she had to take on these different personas.

Meilan is very much a reflection of my child self. I was always the kid hiding in the back row, sitting cross-legged in my chair in an attempt to make myself as small and invisible as possible. And at home, I tried to be the most dutiful, filial Chinese daughter -- just like Meilan. However, it took me until I was an adult to find my voice. I gave Meilan the ending I wished I'd had as a child.