Katherine Ashenburg is the prize-winning author of two novels, four non-fiction books and hundreds of articles on subjects that range from travel to mourning customs to architecture. She describes herself as a lapsed Dickensian and as someone who has had a different career every decade. Her work life began with a Ph.D. dissertation about Dickens and Christmas, but she quickly left the academic world for successive careers at the Canadian Broadcasting Corporation as a radio producer; at the Toronto newspaper The Globe and Mail as the arts and books editor; and most recently as a full-time writer.

Ashenburg's new novel is Her Turn.

I was well into writing the novel when I settled on the title. Liz, my heroine, edits a newspaper column of personal essays called “My Turn.” Calling the novel Her Turn indicates that Liz is going to take centerstage now, and also suggests that it’s finally her turn to make sense of her divorce. There’s also a little word-play in the title, in that Liz changes quite a bit in the course of the book: she turns.

What’s in a name?

When I used to read about novelists saying their characters took over, I rolled my eyes: it all seemed too mystical for me. But I have to admit that Liz more or less insisted on being called Liz. She’s a mostly tidy, organized and conscientious character at the start of the novel (her affair with her married boss being the sole exception to that), so I wanted to give her a classic name like Claire or Ellen. But try as I would to fix those names on her, “Liz” kept bubbling to the surface. I had no idea why. Finally I had to accept that Liz acknowledged her transgressive side, and voila, my heroine had the right name.

I think my teenage reader self might say to me, “What in the world took you so long?” An omnivorous reader of novels in my teens and after, it never occurred to me that I could ever produce one myself. I was 73 when my first novel, Sofie & Cecilia, was published three years ago. Now I see no reason to stop. As for the content, my teenage self liked novels about romance, eccentric characters and heroines with interesting jobs who needed to understand themselves better. I think she would approve of Her Turn.

I find beginnings far easier. With Her Turn, I had gotten Liz into such a mess I couldn’t imagine how I could ever rescue her and end the book. Her ex-husband’s second wife has submitted an essay to Liz, not 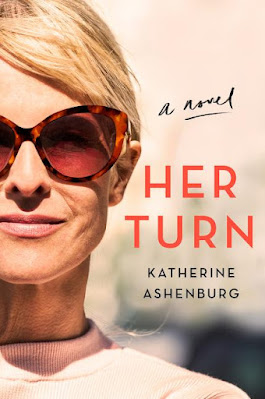 knowing she’s sending it to her predecessor and, guarding her anonymity, Liz has been pretending to engage in a thorough edit of a piece she never intends to publish. Catastrophes multiply and there’s no way Liz can emerge unscathed.

One morning, still in the dark as to how this could end, I told myself that whatever happened, Liz needed to talk on the phone with the second wife. Disciplining myself to write the dialogue with no sense of where it was going led me to a conclusion that satisfies almost everyone.

That depends on the book. My first novel, Sofie & Cecilia, was about three painters, so paintings were my inspiration as well as my subject. For the novel I’m writing now, it’s Dior’s 1947 New Look collection. For Her Turn, I relied on Liz’s career as a journalist, one that I shared. The driven, hyper-focused people in a newsroom almost guarantee that a novel set there will be funny, and I enjoyed returning to that world.